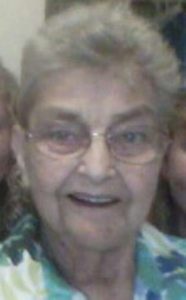 Virginia A. Wagner (Nee Nickel) passed away surrounded by her family on June 28, 2016.  She was born on May 1, 1935 in Beaver Dam, WI to Ervin and Frieda (Nee Homan) Nickel.  After graduating from Beaver Dam High School she moved to West Bend and worked for the telephone company as a telephone operator.

On October 5, 1957 she was united in marriage to Robert Wagner her loving husband of 58 years while raising their four children.  She was an Avon Lady and a Boy Scout leader. Virginia was also employed at the West Bend Company until her retirement.

She loved sewing, reading and doing crafts.  She also enjoyed baking, playing cards and camping with her family.

A funeral service will be held at 1:00 PM on Tuesday, July 5, 2016 at the Phillip Funeral Home Chapel (1420 W. Paradise Dr. West Bend, WI) with Deacon Mark Jansen presiding.  Visitation will be at the funeral home from 11:00 am until the time of service.  Interment will be at Washington County Memorial Park.