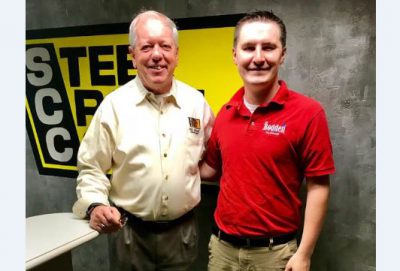 Recently, 59th Assembly district candidate, Ty Bodden, sat down with Gene Wendorff to discuss what the state government can do to help his business thrive.

“South Eastern Wisconsin businesses needs an ally in Madison now more than ever, that is why I will be supporting Ty Bodden for Wisconsin’s 59th Assembly District,” said Wendorff. “Ty is an energetic and well-grounded Wisconsinite who is committed to providing more job training opportunities for Wisconsin’s work force and strongly supports the agriculture and manufacturing sectors in Wisconsin. I am committed to Ty’s campaign to represent the constituents of the 59th Assembly District and endorse his candidacy.”

“Gene is a prominent community member and has created hundreds of jobs in the district,” said Bodden.  “He has done a lot for the city of Hartford and the surrounding communities.  Starting and growing a successful company like his takes guts.  When I am in Madison, I will do whatever it takes to help him and businesses like his to continue to succeed.  Companies like Steel Craft Corp. are in need of qualified and trained employees, but lately they are difficult to come by. Gene, as well as I, have ideas and plans to change that.  I am so appreciative of his support and I am looking forward to working for and serving him and all job creators when I am in Madison.”

There are four Republican candidates vying for the assembly seat including Ken Depperman of Campbellsport, Rachel Mixon of Hartford, and Ken Ramthun of Kewaskum.

The Republican primary is August 14, with the general election November 6.